I must confess, I should pay someone else to do any work. Last week while returning home from work on the New York State Thruway my wife’s 2004 Chevrolet Aveo spewed forth all of its coolant just West of exit 25A. The OEM housing split into two pieces after 90,000 miles. 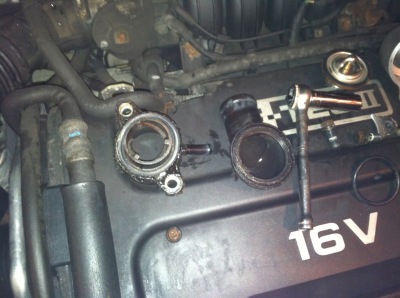 I ordered parts from Amazon and noticed the replacement was two pieces and made of pot metal not the original plastic. I checked Advance Auto Parts and they had the same piece for $41 plus tax, Amazon was $22.63 with tax and Amazon Prime shipping in two days. Same manufacturer same everything so Amazon wins.
Thursday night I decided to try bolting it on the car, what a cluster.

Those little pieces shaped like a D are the ears that once were attached to the housing. I have broken three of four. See that little o ring there? I failed to remove the original one before putting the new one on. Stupid, stupid, stupid. I ordered a new one from Amazon tonight and it should arrive early next week. Just in time for me to install this on Christmas day. 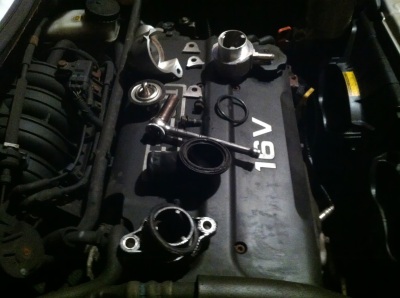 Littered in broken parts and dreams. The one nearest the camera is the original plastic housing with its o ring laying on top of it. The quarter inch drive and ratchet were the tool of choice for the wreckage.

The port on the block where this connects minus the o ring.
So long story short this should cost me about the same as buying the part locally and if I break two more of these it’ll cost about the same as paying someone else to do it.
I got the new part in December 24th and bolted it on the car without breaking it. Burped the coolant system and took it for a thirty mile test drive. Then drove it about eighty miles that night with no problems yet.