I ended up with two Yale YRL220 locks. I linked them with the Ring Alarm app and can control them through that to lock and unlock.  I re keyed the locks to use one key  from Assa Abloy online.

I’m trying to settle on a set of locks that can be opened with a code, key, or RFID cards. I want something that my seventyish year old mother can use and will have enough unlocked time for her to unlock and get the door open.

My first run at this was a Schlage FE595VCAM716ACC Camelot Keypad Accent Lever Door Lock, Aged Bronze. This worked okay but is limited to a four digit code and a key. This allowed nineteen separate user codes. It isn’t recommended for outdoor installations where it is exposed to the elements. My second lock is outside and will face west so I decided to try something else. Changing the battery for this lock is not as easy as it should be. Most of the locks I looked at have a compartment on the inside of the door that can be opened with one or two screws for easy changes. Not so with this lock.

I went with an Adel 3398 Keyless Biometric Fingerprint Door Lock Trinity Fingerprint + Password+ Key. This is a very nice solid feeling lock. I ran into problems with this when my mother was unable to get the lock to recognize here fingers and when she did she wasn’t quick enough to operate the handle in the five second unlocked window. I decided to try another. Documentation for this lock was hard to follow with a number of mistakes in the instructions, nothing to terrible but it would make you go back and reread things a couple of times to understand what they are saying.

Easy to change batteries with a warning beep when the batteries are low and an area on the outside of the lock where you can touch a nine volt battery and temporarily power the lock up to get inside. Using the key requires the removal of the handle and isn’t very practical.

I went with METechs – Keyless Electronic RFID Card Reader Door Lock MID300 Right Hand next. I got a right and left hand lock since these are not reversible. This is the worst lock I have tried. One unit, right out of the box fell apart when I went to install it. It did not include any cards or tokens to operate the lock and I didn’t care for the hidden key slot. The seller also seemed hesitant to disclose what type of RFID fob worked with these and just directed people to buy fobs from them. I ended up sending both of these back and never got them fully installed on the door. I’m still waiting on the refund. the refund eventually came, thank you Amazon Prime.

Not one to be easily discouraged I went to another lock set I found on Amazon. The Rano Electronic Door Lock. W/ Code, Mifare Keyfob & Mechanical Key. (Version 2). This uses a key, a four to eight digit pass code, and RFID stickers or fobs. I can use any one of these methods to unlock the door. Its not as solid feeling as the Adel lock and it doesn’t have a fingerprint reader but it works well. It will store up to two hundred user codes, this includes fobs, stickers, and key codes. Individual codes can be deleted or deactivated for a period of time

I haven’t been able to figure out how to get my Nexus 5x to work with this yet as the instructions are a little unclear as to how I need to use a sticker and the phone. Using NFC Tester the phone seems to pass all tests for use with this lock. I think I just need to spend a little more time with the lock to get it working correctly. The line above seems a little confusing where it states you need a sticker to make it work with your phone.

I used the two RFID stickers that came with the lock on my wife’s MotoG (no NFC) and my sisters IPhone. Just place the sticker on the outside of the phone case and it works fine when held up to the lock.

I’m using a couple of eight digit codes and these work well you just need to hit # after entering the code. The door stays unlocked for about ten to fifteen seconds after a correct code is entered or a fob is used. I think this will be enough time for mom to get in and not freeze to death in the hallway come winter.

For the lock on the exterior door I added a cover to keep the moisture off it and so far that seems to be working well. I’ll have to see how this works once the snow starts to fall and maybe blow in through the bottom of the cover. 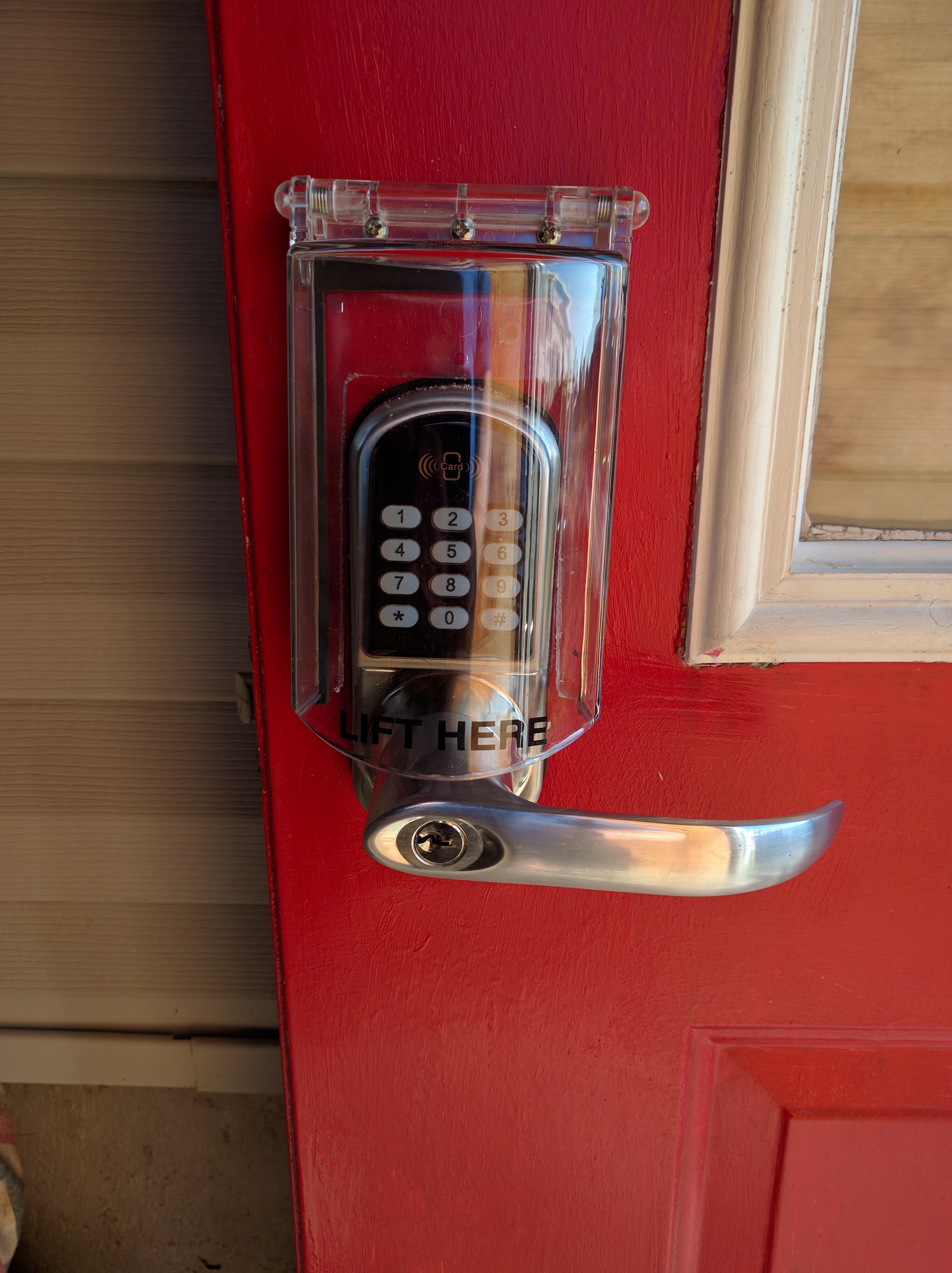 The exterior door lock was kaput when I got home today. To much ice and snow on it so it gave up and I had to use a key to get in. I replaced it with Yale Real Living  Touchscreen Lever Lock with Z-Wave in Oil Rubbed Bronze (YRL220-ZW-0BP). WIth this connected to my Samsung Smartthings hub I can unlock the door from my phone. So far so good this has a touch screen rather than buttons so it should be a little more water tight. 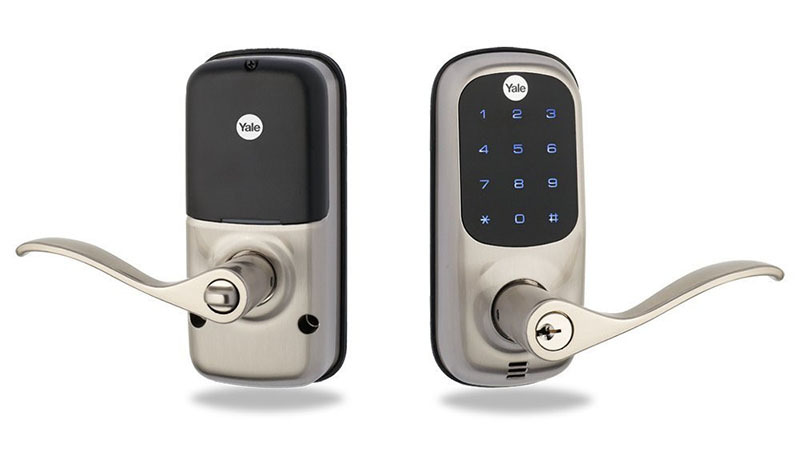 At first I used the Z-wave in these with SmartThings and then moved them to Hubitat and eventually connected both of the locks with my Ring Alarm. Moving between different Z-Wave systems was a small hassle but not terrible, just time consuming.

Batteries need to be replaced about every six to eight months so far. The key works and they can be unlocked with the button from inside or the keypad from outside. Using the keypad and the code setup through Ring Alarm has the added benefit of disarming the alarm system when I unlock the door.