I have taken the plunge and I’m thirty day trialing Republic Wireless. My biggest worry is the Sprint network as locally Sprint’s network is garbage. The phone will only work on the Republic network, you can’t take it to a different service, but you can disable the service if needed. You may also change the level of service twice in each billing period. You also can’t bring your own phone.

I selected the Moto E for the phone and I’m using the $10 ($13.14 with taxes) a month plan with no data just calls and text. All data is done across WiFi when I am close enough to an access point. Total cost for the $99 phone was roughly $120 with taxes added in.

I opened the phone and removed the rear cover so I could install a 32 GB mini SD card that I picked up at Walmart for $22, I think 8 GB would have been plenty for my use as I haven’t used a full GB on the SD card yet. Taking the cover off was a real pain in the neck. Turned it on set it up to use my local WiFi with WPA2 encryption, no problems. Made a test call to my Verizon IPhone and to the Verizon home phone, everything worked. Seemed to work fine with a slight delay from when I spoke till when I heard the message. I don’t think this will be noticeable in a phone conversation where you aren’t in the same room as the person making the call.

I tried to call a Vonage number and this consistently failed, I think this was the fault of the Vonage number I was calling but I don’t have a second number to test that with to prove it out.

I installed Audible, Amazon Music, Podcast Addict, ROKU remote and Sygic GPS Free. Each App has been set to use the mini SD card for storage. The Moto E only has 4 GB on board memory and I’ve already run out of space when trying to install an app.

I didn’t care for Podcast Addict so I uninstalled it and I’m trying Player FM – Podcast and Sync now. Nothing terrible for PA but it just felt clunky to me.

Sygic worked good getting us home the other night no lag in telling us when to turn or rerouting us when I intentionally missed a turn. It seems we had plenty of memory in the phone to run this app. I bought the paid version of Sygic for about $24 on sale a lot cheaper than the first GPS I bought that was some thing over $500.

I have about twenty nine GB left on the SD card after downloading some songs from Amazon and Google Play. About 230 mb left of on board storage.

Battery life I am down to about 27% after twenty four hours with Bluetooth on and using it in the car with a Chrysler Uconnect system. I made several calls and texted throughout this time. My IPhone 5c is at about roughly the same battery life over the same period of time.

Bluetooth off and a lite day of use on. I also added Dropbox and Google Voice apps. 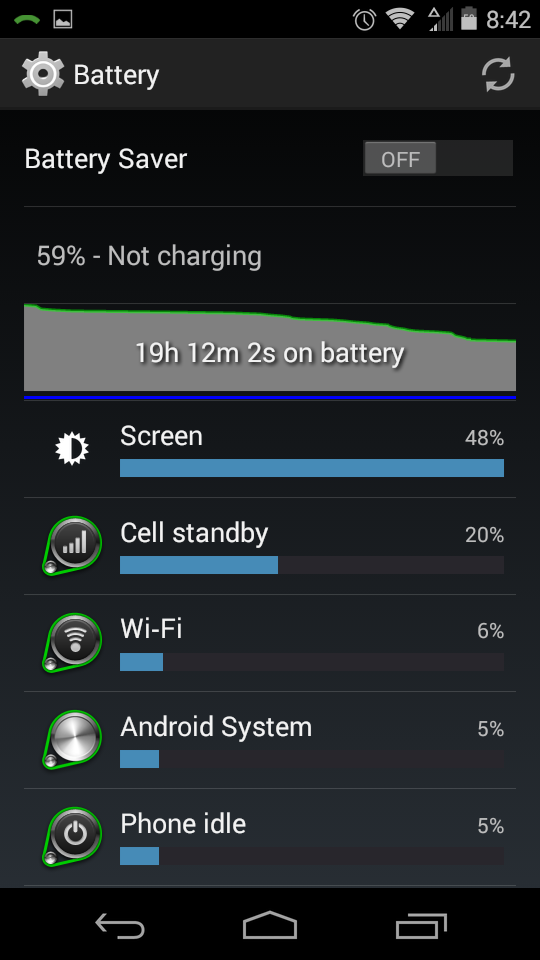 Best Battery life so far below. About even with my IPhone 4 but not nearly as good as the 5c that I currently have for work.

I couldn’t use any flashlight apps as there is no flash on the Moto X’s camera, I do use a flashlight app on the 5c and it is one of the better uses so far for the phone. 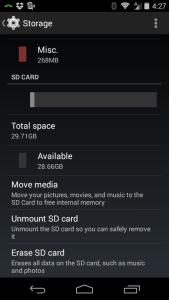 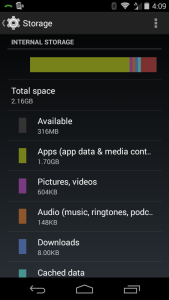