On vacation this week and doing a few things around the house as well as watching all the activity going on in the nearby fields. I can hear hay being cut about a mile away and I see people up at the Tillapaugh farm feeding heifers. This always reminds me of when I worked on farms from the time I was twelve or so.
I worked on the Case farm up in Gilboa and this was my favorite, I just liked the land and the creek there. The old house had a second floor porch all the way across the front. A very stately place in decline for years. The work was mostly easy stuff painting and cleaning up. Glenn Case took me up there to work and the farm belonged to his father who had to be in his seventies. Rolling green fields with rocks sticking up everyplace and only a dozen or so cows. They had a small tractor, maybe a Farmall with a front end loader on it and narrow row crop front end. I could be wrong about the make and model but it always reminded me of this H. 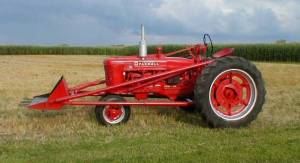 That tractor always looked evil and didn’t have shiny paint like the one in the picture. These were good times spent working there.
For about two summers I worked on Glennis and Terry Blanchard’s farm over near Ephratah. This was another small farm, maybe twenty cows or less milking. Glennis was a mechanic for a bus garage and this was his second job. You can never have to much work you know. They had a couple of cute daughters Becky and Roxanne. The barn had a vacuum line for milking and the milk went into a five gallon stainless steel pail and then you would walk it over and dump it in the bulk tank. This farm had a John Deere with a narrow front end and a hand clutch. This tractor kept you busy all the time hand throttle, hand clutch, and a shifter. It had some gearing in it that would go about twenty miles an hour on the road and with that narrow front end it was twitchy at road speeds.

I enjoyed this place as well and have some good memories from this farm. I still see Terry every now and then and I have seen Glennis’s name in the paper mentioning the garage where he is the manager now.
The farm I worked on the longest was Howard Crosby’s place. I live on the back of that farm now in a small plot that my parents bought from Howard about twenty years ago.
Howard had Allis Chalmers tractors and I usually drove one of the older smaller tractors for him. Hauling things like hay wagons around and raking hay in the fields. These were very good summers. Howard was always patient with me and I think I broke a few things that never should have broken I was just trying to go faster.

I broke a manure spreader one day when I got to the field and the gate wouldn’t lift and I tried to put the gate back down with something stuck under it. Howard welded that one back together and fixed it up.
Another time I broke one of the old hay wagons coming down a hill and I didn’t slow down for an old broken culvert. I think I nearly killed Timmy that day as he and Tom were riding on the wagon when it bounced up in the air as we crossed the culvert.
Another time I had a full manure spreader hooked up and we were over by Herman Rd came down the hill there and a tie rod popped off the old tractor and the front wheels went in different directions. I came to a stop all in one piece and not crushed by a load of manure at the base of the hill. But it was touch and go there for a while.
I think I was about twelve when my father hooked up two hay wagons and a rake to the back of the tractor and had me drive all of that from the main farm down to Howard’s mothers place where there was another field we were going to bale that day. This had to be about fifty feet long with all this in tow. Nothing bad happened and I survived but I was nervous that day.
One summer I raked all summer long with a wheel rake and didn’t have any tines break. Then Howard took it out one day and broke about three tines in the first hour. Things must have been just ready to break at any second and I was happy that wasn’t me when things did break.

I remember picking stones in the fields here and discing fields for hours as well as cutting firewood back in amongst the trees on a crisp fall day. I worked on this farm for several years.